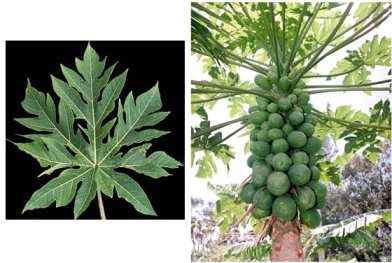 Papaya/Pawpaw apaya (Carica papaya) originates from tropical American countries. Today Papaya is cultivated in most tropical countries around the world. The Papaya with the Latin name carica papaya is called Paw Paw in Australia and New Zealand. This is in no way related to the Paw Paw in North America that has the Latin name asimina tribola, though both are medicinal plants.

Papaya leaf juice is claimed to have reversed cancer in many people living on the Gold Coast in Australia. Harold W. Tietze in his book Papaya The Medicine Tree, describes how to make the juice and tells the stories of many cancer survivors who reportedly used the juice to get rid of their cancer. The book contains the the following report that was published in the Gold Coast Bulletin. “PawPaw Cancer Plea Bears Fruit”. Gold coast gardeners have responded to an appeal by cancer victims desperate to find supplies of pawpaw leaves. And the Gold Coast man who, 14 years ago, first exposed the leaves as a possible cure for cancer has been tracked down to a Labrador (Gold Coast) nursing home. The story of how Stan Sheldon cured himself of cancer by drinking the boiled extract of pawpaw leaves was first told in the Gold Coast Bulletin in 1978.
Papaya Leaf ‘Miracle Cure’

New research in the United States has given scientific support to the claim that papaya leaves are indeed a cancer cure, isolating a chemical compound in the pawpaw tree which is reported to be a million times stronger than the strongest anti-cancer drug. Mr Sheldon, says the discovery does not surprise him. “I was dying from cancer in both lungs when it was suggested to me as an old Aboriginal remedy” he said. “I tried it for two months and then I was required to have a chest x-ray during those compulsory TB checks they used to have. They told me both lungs were clear.” “I told my specialists and they didn’t believe me until they had carried out their own tests.” “Then they scratched their heads and recommended I carry on drinking the extract I boiled out of the papaw leaves.”

“One man has been growing papaws and giving away the leaves to cancer victims ever since he read the Bulletin’s original 1978 story about Mr Sheldon. “I have no doubt that it works,” he said. “I know people walking around now who should have been dead according to their original cancer diagnosis. But the pawpaw treatment helped them to beat the cancer.”

The recipe is as follows:
Wash and partly dry several medium-size papaya leaves. Cut them up like cabbage and place them in a saucepan with 2 quarts/ litres of water. Bring the water and leaves to the boil and simmer without a lid until the water is reduced by half.
Strain the liquid and bottle in glass containers.
The concentrate will keep in the refrigerator for three to four days. If it becomes cloudy, it should be discarded.

The recommended dosage in the original recipe is 3 Tablespoons/ 50ml three times a day. It is recommended to read Papaya The Medicine Tree for the interesting stories of “incurable” people who have used this extract to beat their cancer, and for other medicinal uses of papaya.

A letter from R.J.W.:
“… I was inspired to send some leaves to a few people dying from cancer. The first, a banana grower aged 40, had two operations on his bladder for cancer which did not prevent metastasis. I placed him on a very simple diet consisting of zero junk food, fresh living food with no preservatives, white flour, sugar, colourings or additives and told him to “stuff a handful of pawpaw leaves into a saucepan and fill with water. Boil, simmer for one hour and drink it till it comes out of your ears.” He did so and five weeks had no trace of cancer whatsoever.”

The leaves have also been reported successful used when dried and ground. The astonishing effects of the pawpaw have also been proved in tests on mice. The results were very impressive; tumors found in humans were being injected in mice and during treatment with papaw were disappearing.

Pawpaw twigs contain acetogenins – active compounds that modulate the production of ATP in mitochondria of specific cells – which affects the viability of specific cells and the growth of blood vessels that nourish them. A recent clinical study with over 100 participants showed that the pawpaw extract, containing a mixture of acetogenins, supports the body’s normal cells during times of cellular stress.

Acetogenins found in pawpaw have been shown to have dramatic biological activity, being active against worms, some viruses, fungi, and many cancer cell lines. When compared with conventional chemotherapy agents, they have worked comparably in cell culture and animal studies, but at far lower concentrations and with almost no toxicity to host animals.

“Pawpaw is very effective on its own. It typically doesn’t need any supporting supplements. There are however, products that may be used in increasing the pawpaw’s effectiveness. The products are Noni, Immune Stimulator, Colostrums, and Protease Plus (especially when fighting a digestive tract or intestinal tumor).

However, pawpaw should not be used with any kind of thyroid stimulators (e.g.: KC-X) or with CoQ10 (coenzyme Q10).
Papaya affects ATD production in cells, so when used in conjunction with C-Q10 and similar compounds a contraindication evolves with the thyroid in hyperthyroidism / hypothyroidism patients. This usually would not generally affect the normal population, only people with a thyroid history. this combination may also expose an undiagnosed “thyroid condition”
For cancer patients taking Laetrile, it is important to consume paw paw and pineapple each day, as the natural enzyme strips the coating on the cancer cells, so that the B17 in the kernels can work.”

Use a Zapper Digital with the papaya leaf treatment to enhance the cancer fighting benefits.

Use only Frequency Generator Digital Zappers, that have more power than the conventional Zapper and are the “Digital type Zapper” specifically outlined on page 502 in “Cure for all diseases”. Run a 10 frequency comprehensive parasite set on the Zapper Digital Professional model in order to target the various parasitic pathogens, who live in these particular frequency ranges.