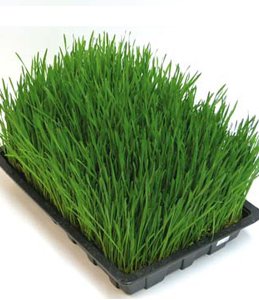 “Wheat grass” is a variety of grass like barley, oats and rye, grown in fields across America. “Wheatgrass” refers to grass grown indoors in trays for approximately 10 days and is the kind that is squeezed into a fresh juice. The tray-grown grass is used primarily for therapeutic purposes. The 60+day old field grown grasses, available in dehydrated powder or tablets, are used primarily as nutritional supplements.

Wheatgrass juice, made from sprouted wheat berries, is said to be high in chlorophyll. Claims are that the juice “cleanses” the body, neutralizes toxins, slows the aging process, and prevents cancer.

Wigmore theorized that rotting food in the intestine forms toxins that circulate in the bloodstream (aka, the intestinal toxicity theory) and cause cancer. She taught that the life span of the wheatgrass juice was less than three hours so it had to be cut from growing plants, juiced and consumed fresh. She speculated that the enzymes found in raw wheatgrass were alive and could “detoxify” the body by oral ingestion and by enemas.

It was the chlorophyll in wheatgrass that enthused Wigmore. She called chlorophyll “the life blood of the planet.” Wigmore believed that cooking foods “killed” them because this deactivates enzymes. She held that the moment the “sacred” 7.4 acid-alkaline balance (the same as human blood) is “killed” that its effectiveness would be reduced.

The fact that grass-eating animals are not spared from cancer, despite their large intake of fresh chlorophyll, seems to have been lost on Wigmore. In fact, chlorophyll cannot “detoxify the body” since it is not absorbed. Although it is conceivable that enzymes present in rectally-administered wheatgrass juice could have chemical activity, there is no evidence that this is beneficial. In fact, when challenged legally, Wigmore backed away from healing claims stating that she merely had an “educational program” to teach people how to “cleanse” their bodies and make vegetable juices (she also offered for sale a variety of juicers and other “health” paraphernalia).

Wigmore wrote at least 15 books, established the Hippocrates Health Institute (c.1963) which later was renamed the Ann Wigmore Institute (AWI). Wigmore claimed to have a Doctor of Divinity (DD) from the College of Divine Metaphysics in Indianapolis She also listed a Doctor of Philosophy (PhD) and a Doctor of Naturopathy (ND) degree at different times. None of her credentials appear to have been from accredited schools. Among other things, Wigmore also promoted “natural hygiene,” spiritual healing, zone therapy, hydrotherapy, acupuncture, color therapy, and spot therapy. A number of “Living Foods” groups around the world espouse Wigmore’s teachings.

Popularized in the 1970s by Dr. Ann Wigmore and other natural food pioneers, tray-grown wheatgrass juice has become a familiar product in juice bars, natural food stores, and the homes of do-it-yourself juicers worldwide. The juice has been associated with many health benefits. However, many who purchase “fresh” wheatgrass juice don?t realize that it has not reached its full nutritional potential. Wheat grass grown outdoors in its natural climate has much higher levels of vitamins, minerals, and chlorophyll than tray-grown grass due to vast differences in the growth process.